How does the Crochet-FreeBSD ARM boot work?

This is my 3rd blog posting on the topic of the Crochet-FreeBSD ARM boot process.  The other two are here and here.   At long last, I have the Crochet-FreeBSD build for Wandboard working properly, with U-boot and ubldr.  This article will serve, I hope, to document the entire process and give others a place to start in booting FreeBSD other embedded ARM devices.   If you want to follow along via the boot log, it's here.  Bootable images are here.

Booting FreeBSD on an ARM device has three primary steps: 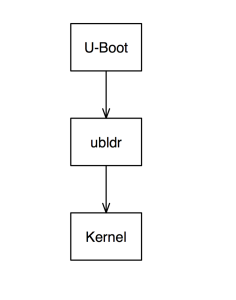 When the Wandboard starts, it loads a boot image from the mmc , at a known location on the disk.  In the case of Crochet-FreeBSD this image is U-boot.  After U-boot starts it loads and runs ubldr, which in turn loads the FreeBSD kernel and boots it.

The Wandboard documentation here shows the basic requirements of the disk layout on the mmc card.  In particular:

In the case of the Crochet-FreeBSD image for Wandboard, I've chosen this layout

For FAT32 partitions of less than 512MB size, the block size is 4KB.  So, 0x4000 blocks from the start of the disk is 64MB into the disk.  Given that U-boot is about a 300KB binary, we can be quite sure that the FAT partition will not overlap with U-Boot.  ubldr compiles to a 250KB binary and is stored on a 50MB partition; also plenty of space.

U-Boot is a very capable boot loader, that can boot a variety of architectures, of which one is ARM.   In the case of Wandboard, however a couple changes are needed to the configuration.   The patch files are here.  The primary requirements are:

When U-Boot starts, it looks for the file "uEnv.txt"' on the file system.  It's very important that the first partition on the file system be FAT, since U-Boot doesn't include UFS support.  The contents of uEnv.txt are instructions to U-Boot to load ubldr and start it.  Specifically:

From here, ubldr will start.  The reason we had compiled U-Boot with ELF support is that ubldr is an ELF binary, so we needed the U-Boot command "bootelf".

The choice of memory address 0x88000000 is mostly arbitrary.  According to the manuals, the RAM starts at address 0x100000, so this number has to be larger than 0x100000, smaller than the physical size of the RAM, and not conflict with the memory address that U-Boot was loaded at.  I suspect the Wandboard loaded U-Boot at 0x100000.

ubldr is an ARM implementation of loader(8).  It's not technically necessary to use ubldr; U-Boot could just boot the kernel directly, but having an implementation of loader(8) is quite useful.  For example, it provides a serial console for kernel debugging, and it allows passing flags to the kernel at startup time.   Some drivers, such as urtwn, for example require passing flags to the kernel to accept licensing terms for binary blobs.

Since ubldr is not relocatable, it's necessary to compile it with the memory address that it will be loaded at.  If you look here, you will notice that the address 0x8800000 was passed to the compile command.

When ubldr starts, it'll mount the UFS root file system, and read the file /boot/loader.conf.  In that file we can configure the boot loader, including passing kernel parameters, setting the serial console speed, configuring boot loader menus, etc.   It's worth noting that ubldr configurations are coded in FORTH.

Another aspect of ubldr which is important is that it uses the U-Boot API.  If you're interested to know how that works, the ubldr source is here.  The Makefile pulls in U-Boot deps, and they are referred to in conf.c.

On the topic of ubldr, there is an excellent blog post here that is worth reading.

One trick that was used for Crochet-FreeBSD's Beaglebone build was to configure /etc/fstab to mount the FAT partition to /boot/msdos.  The specific configuration is

This is interesting because uEnv.txt is on this partition. We can modify it if we want to try new configurations without rebuilding the image.

5 Responses to "How does the Crochet-FreeBSD ARM boot work?"